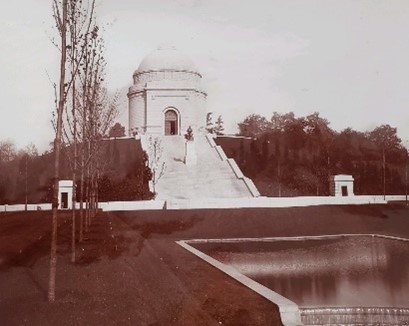 William McKinley the 25th President of the United States was born January 29, 1843 in Niles Ohio. He served in the Army as part of the 23rd Ohio Infantry during the Civil War. After the war ended McKinley decided to go into the law field and attended Albany Law School. Once he passed the bar he moved to Canton Ohio and began practicing law there. He began in politics when his army friend Rutherford B Hayes was nominated for Ohio Governor and McKinley began to make public speeches endorsing him. In 1869, McKinley ran for the office of prosecuting attorney of Stark County and unexpectedly won and then was reelected for a second term.
With his rising success, he Ida Saxton of Canton Ohio. They became married and had two girls, both whom passed before the ages of 3. Ida’s health soon declined with the passing of both of her girls. However, she still insisted that he continue his political career. He campaigned for the Ohio 17th congressional district and was elected in 1877. Soon he was urged to fun for Governor of Ohio and won but it was not an easy time in office. Though he never openly voiced his thoughts to run for President, he eventually did in 1896 and won. During his Presidency the Spanish American War broke out. He was reelected for a second term and was inaugurated in 1901 and he and Ida began a tour of the nation with heavy security due to the recent assassination of several prominent figures in Europe. On September 6, 1901 President McKinley was shot and passed on September 14th 1901.
The Presidents casket made its way by train, first to Washington, then in Ohio at the state Capitol, and then was taken to Canton. A hundred thousand people visited the casket in the Capitol, many waited hours in the rain just to pay their respects. In Canton, thousands waited to view the casket in the Stark County Courthouse. After funeral services, the casket was sealed and taken to a receiving vault at West Lawn Cemetery in Canton, to await the construction of the memorial to McKinley already being planned.
Construction of the memorial began in 1906 at the site where McKinley had once said he thought a memorial should be constructed in honor of Sailors and Soldiers from Stark County killed in action in American wars. The steps are 50 feet wide and arranged in four flights of 24. Another 12 steps take visitors into the monument. In total, there are 108 steps from ground level to the top of the monument. The entire exterior of the structure, platforms, steps and approach are in Milford Pink Granite provided by The George Dodds and Sons Granite Company now Dodds Memorial. The 9-1/2 foot tall bronze statue depicting President McKinley delivering his final public address at Buffalo, New York, on September 5, 1901 was created by sculptor Charles Henry Niehaus.
A ceremony was held on September 30, 1907 and was one of the most memorable event in Canton History. President Theodore Roosevelt was there to pay respect as well as James Whitcomb Riley who read a memorial poem he had written for the fallen president. McKinley and his wife, who had passed away months before the memorial was finished, were interred there with their two daughters.