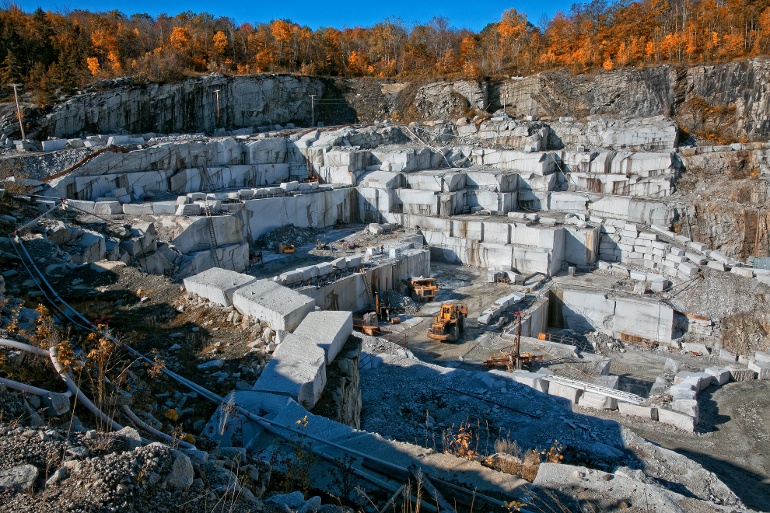 But one couple who own a number of monument companies throughout Pennsylvania was so committed to giving their customers the highest quality products, they went right to the source to compare domestic versus foreign granites and the carbon footprint each produced.
Josh and Madalyn Weaver, owners of Weaver Memorials with nine locations in Pennsylvania, traveled to China four years ago to see for themselves what that foreign manufacturing process looked like.

What they came away with was the knowledge that granite produced in North America was far and away the most sustainable memorial choice.

“There was a stark difference between the way they produce a monument in China and the way a monument is produced in North America,” said Josh of their trip to Xiamen, a major monument manufacturing region along China’s southeast coast. “We’ve got much more stringent environmental standards here in North America. In Asia, not so much.”
In terms of pollution, the Weavers, who’ve owned the monument company for four generations, reported seeing waste and debris scattered around facilities and a lot of runoff spilling onto gravel or poorly graded surfaces. “There didn’t seem to be any optimum methods in place for containing any chemicals spilling onto the ground. If they splashed on the floor, the workers weren’t too concerned about it,” he said.

The Weavers also observed little to no safety guidelines for workers, including little if any safety gear. They saw workers in bare feet and children working in the factories. Josh even recalled seeing a teenager operating a wet saw in bare feet with a live electrical wire dangling nearby.
“It was truly unbelievable stuff that you’d get shut down for in North America,” he said, adding that it’s what helped steer them away from purchasing monuments from Asia. “While I’m not a huge proponent for regulating business, I do think there is a need when it comes to safety.”

Then there are other safety issues to consider, after a monument made from foreign granite is in place. Oftentimes manufacturers add dyes and chemicals — like motor oil — to black granite from China to improve its looks that runs the risk of seeping into the ground. “Now, your family’s headstone is leaking oil,” said Josh.

Finally, Josh pointed out the huge effort needed to get a big block of granite from China to the United States. The heavy material requires heavy equipment to get it to a port and then shipped across the ocean and then, potentially, across several states before it reaches its final destination and leaving a giant carbon footprint in its wake: excess emissions and energy consumption.
In the end, the Weavers like to let their customers decide for themselves what stone to choose. “Our goal is to explain all of the differences and let the customer decide,” said Josh. “We find the more we educate a family, nine times out of 10 they buy North American granite for the quality, durability and more regulated manufacturing process.”