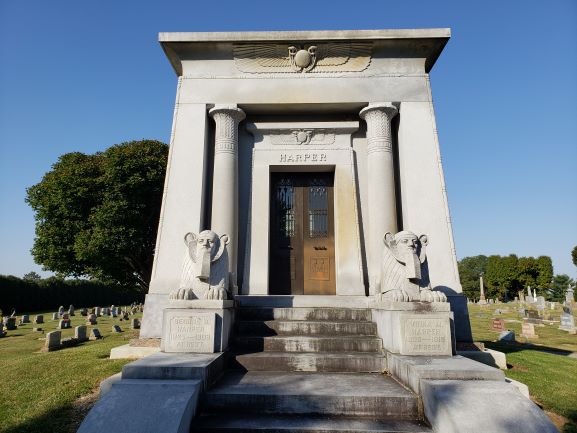 The citizens of Cedarville have driven by the George Harper Mausoleum, at North Cemetery, quite a few times in their lifetime but probably do not know the contributions that he made to the town itself.
George Harper was born in 1825 to a family originally from Harper’s Ferry, VA. When he finished school at the age of 18, he began dealing cattle in Illinois and became quite wealthy. Upon his marriage in 1860 he and his wife moved to Greene County. By 1881, they had become one of the largest landowners in the county with a total of 1100 acres owned in and around Cedarville.
He also started the George W. Harper Banking Company in Cedarville that operated until the Exchange Bank bought them out in the late 1800’s. Being one of the wealthiest families in Greene county, he used his money for good and became an education benefactor for Cedarville college, donating $5000 to endow a chair in economics.
Upon his death in 1908 he was laid to rest in Cedarville’s North Cemetery. His wife Vinna, along with the architects at the George Dodds and Sons Granite Company (now Dodds Memorials,) began constructing the Egyptian Revival mausoleum. The mausoleum was completed in 1915 only one year before Vinna died. She also donated the Veterans’ Memorial that stands at the cemetery, in honor of her husband.
In 1988 the mausoleum along with the cemetery entrance also constructed by Dodds Memorials, was listed on the National Registry of Historic Places. Typically, cemetery properties are not qualified for the list, but because of the unique design they made an exemption for the mausoleum. They considered it an important example of early 20th century mortuary architecture.
Dodds Memorials is proud to be a part of so many amazing pieces of history. From the McKinley Memorial to local veterans’ memorials, we have been here through the years to help bring these projects to life. Stay tuned for more of the Dodds history another blog post will be coming!