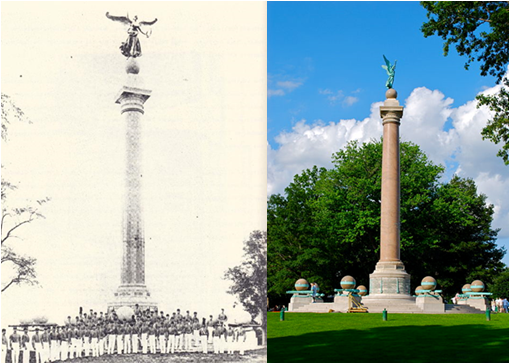 Over the years Dodds has been a part of numerous veterans and civic projects, but few appear as towering as Battle Monument located on Trophy Point at West Point Academy in New York. Designed by Stanford White, it was dedicated on May 30, 1897 by surviving Civil War veterans. The monument was financed by monthly contributions from the pay of the officers and soldiers of the regular army.
The column, made of Stoney Creek Granite and standing 46 feet tall and 6 feet in diameter, is believed to be the largest column of polished granite in the Western Hemisphere. The rest of the monument is constructed of Milford Pink Granite. Both granites were quarried by Dodds Granite Company now Dodds Memorials who, at the time, owned the quarries.
Inscribed on the cannons are the names of 2,230 Union officers and soldiers from the Civil War. A statue, designed by Frederick MacMonnies, sits atop of the monument. The statue that is now there, is the second version. Just months after it was unveiled, MacMonnies agreed to replace the original statue after complaints that it was too large and awkward.
It is so amazing to dive into the history we have here at Dodds. We have learned so much by going through some of our old photos and books found in our main building over the years. We hope to share all the cool things we have discovered, so stay tuned there is more to come!